Q: Will my foundation raise back to original height? 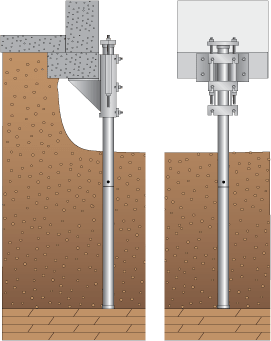 A: In most cases, the structure is raised to the point where it is not visually detectable. It usually isn't a matter of ' if we can raise it higher,' instead it is how high the homeowner wants it. When you raise a structure it may cause new cracks or open old ones. The process of raising it is a team effort between the owner and the installation team.

Q: Is underpinning with piers a permanent solution?

A: YES. Since the piers are pushed through the active soil that affects your foundation, it takes the soil condition out of the equation.

Q: Can I still live in my house while the work is being performed

A: Yes, all of the work is performed around the outside of the home with minimal disruption to the owner. In some projects, it may be necessary to work from the inside. Even in those conditions, it will not cause the homeowner to vacate the structure.

Q: Are the piers strong enough to support the structure?

A: Yes, we have installed these piers under three-story buildings, huge machine bases, and large tanks. The maximum capacity of the piers will not be reached, which allows for a high safety factor in the design of the piers.

Q: How far down will the piers be pushed?

A: As the piers are being installed, the pressure is monitored. The piers have to be imbedded into a hard stratum; this depth will vary geographically. Typical depths are approximately 25' deep.

Q: What is the major difference between piers?

A: Some piers have a smaller shaft, which may cause the piers to bend or fail. Larger diameter round tubing is stronger. A minimum of a 2 7/8" diameter pier is the best for raising residential structures because of the load capacities.

Active Zone: A load bearing soil mass that is moving.
Backfill:  The replacement of excavated material back into a hole.
Bottle Jack:  A hydraulic devise used to support an automobile (not a house or commercial structure)
Carbon Fiber Staples:  Carbon fiber material is used to stitch across slab cracks. 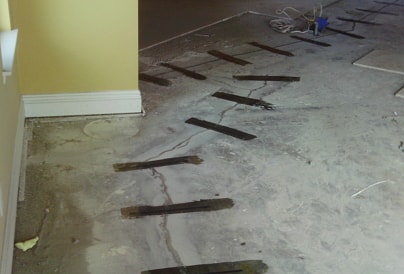 Consolidation:  Usually occurs when weight is added to the soils with a home's foundation weight. Also when water is present your home may experience consolidation as a result.
Crawl Space: “ Foundation type that incorporates an air space between the soil and the living space.
Differential Settlement or Movement:  The difference in vertical foundation movement at various locations around a structure usually causing foundation failure.
Drywall Cracking:  These cracks develop due to foundation failures. The cracks generally develop at corners of doors and windows, sometimes pointing toward areas of failure.
Eccentricity:  This can be described as a reaction force from the center of a load causing bending forces.
End Bearing Pier: A pier that has an enlarged base to develop its capacity through end bearing rather than through skin friction along its shaft.
Expansive Soils:  Usually fine grain soils that exhibit large shrink and swell with changes in the soil's moisture content.
Footing:  An enlargement at the bottom of a foundation to distribute the load of a structure to the underlying soils.
Foundation Cracks: Fractures in concrete walls or slabs generally from differential settlement or lateral movement.
Foundation Engineer:  A civil, structural or geotechnical engineer that specializes in the design or remediation of foundations.
Foundation Movement:  Post-construction movement of a foundation system detectable by changes in elevation usually accompanied by visible signs of distress, such as drywall cracks, concrete cracks, doors and windows out of square in their frames, etc.
Foundation Releveling:  Underpinning or stabilizing a structure that has settled.
Heaving:  Vertical movement upward of a floor slab or foundation which can be associated with expansive soils.
Helical Pile:  Anchor consisting of a central shaft and one or more helical bearing plates, each with a defined pitch. A helical pile is installed by rotating it into the ground and its capacity is determined by the torque needed to advance it into the underlying soil layers.
Helical Tie-Back Anchor:  A screw anchor installed in soils designed to stabilize or reduce the future risk of horizontal movement of foundations and retaining walls.
Hydraulic Torque Motor:  A heavy duty gear drive motor that is used to hydraulically install screw anchors.
Hydrostatic Pressure:  Pressure exerted by a fluid due to its weight. Water at the surface or below grade are examples.
Lateral Pressure:  The horizontal pressures exerted upon a wall or retaining wall by surrounding soils.
Load Bearing Stratum:  A layer of suitable soils or bedrock with capacity to accept the force imposed upon it.
Mud Jacking: Process of pumping concrete under concrete slabs to fill voids in an attempt to lift.
Pier or Pile:  A vertical load-bearing member. The IBC defines a pier that is limited to a length-to-diameter ratio of 30 or less and a pile has a length-to-diameter ratio larger than 30.
Pressed Concrete Pier:  A concrete cylinder that is driven directly below the foundation by bottle jacks.
Sinking or Settling:  Vertical movement of a foundation due to consolidation of soils supporting the structure.
Skin Friction:  The frictional resistance between soil and a foundation.
Slab Cracks: Can be categorized as either a shrinkage crack, settlement crack or heaving crack.
Steel Pier or Resistance Pier:  High strength structural steel tubing that is hydraulically driven into the underlying soil to a load bearing stratum to underpin a foundation and provide additional foundation support.
Structural Damage:  Distress in building components such as drywall cracking, door and window frames out of square, concrete cracks, etc. Damage that causes structural instability should be corrected immediately.
Synchronized Lift:  A precision system that allows uniformed elevation lift and permanent stabilization.
Tie Backs:  A helical screw anchor installed horizontally into load bearing soils that provides lateral support through the anchor's helices. Used for horizontal support and slope stabilization.
Underpinning:  Foundation element such as a helical pile or resistance pier installed to provide additional foundation support or to completely transfer the structural foundation loads to adequate bearing soils.
Vertical Cracks:  Vertical fractures in a structure's foundation or walls generally caused by excessive total or differential settlement.
Void Filling:  The injection of lightweight polyurethane to fill the void between a slab and the soil.